History comes to life for JROTC cadets at Gettysburg and D.C.

As part of a leadership class, 15 JROTC cadets from Marion High School recently traveled to Gettysburg Battlefield National Park where they had the opportunity to undertake a military-style staff ride, a learning experience rarely available to the average high school student. They then traveled on to Washington, D.C., where their experiences included a White House tour and more. 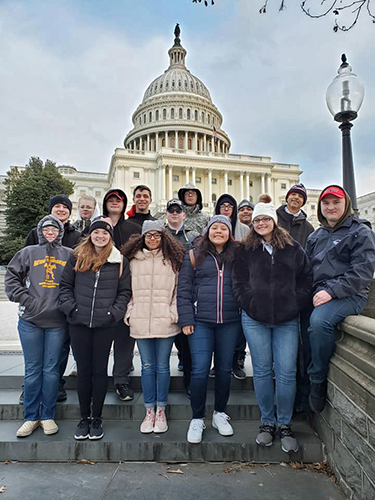 Marion High School JROTC cadets gather for a photo with the U.S. Capitol building in the background during their trip to Washington, D.C.

A staff ride is a historical study of a campaign or battle that is used as professional development by the U.S. Army for its leaders. A staff ride examines the dynamics of battle and the human dimension as well. It can illustrate how terrain, unit cohesion, leadership, technology, and more affected a historical battle, and therefore provide a framework for battle analysis. It also promotes the study of military history and heritage.

To prepare for the staff ride, the cadets had to research a particular portion of the Civil War Battle at Gettysburg. While walking the ground on the battlefield in Pennsylvania, each cadet had to describe the actions of the opposing leaders and how the events in fighting were affected by the various leaders’ decisions and the challenges with the terrain and communication.

“A staff ride is a great learning experience,” said retired Lt. Col. David Farlow, senior Army instructor for the MHS JROTC. “It is a tool that can be used to examine how internal and external factors, communication and timely decisions affect what actually happens. We can learn from the experiences of others.” 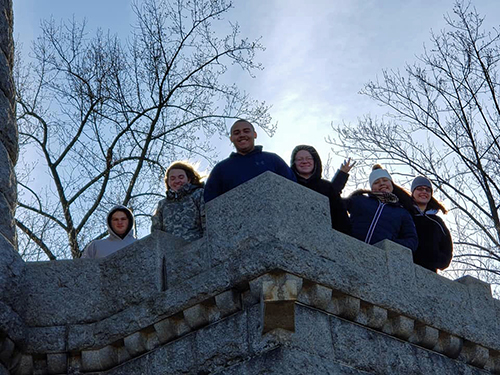 Speaking of his experience on the staff ride, MHS junior Korbin Elliott said: “It was an amazing trip. I learned in detail about the Battle of Gettysburg. I love military history, and walking the ground made it seem more real to me.”

Cadet Lunden Colley, an MHS senior, said she really liked learning the history of the battle, especially her assigned area of reporting on the happenings around Spangler’s Spring near Culp’s Hill.

The MHS cadets then traveled on to Washington, D.C., where they spent two days visiting the White House, the monuments on the Washington Mall, Arlington National Cemetery, and the Smithsonian Institute.

Given JROTC’s emphasis on marching and precision drill, many of the cadets were impressed with the soldiers at Arlington National Cemetery.

“The Changing of the Guard at the Tomb of the Unknown Soldier was incredible,” Cadet Lucas Riley, an MHS senior. “The precision movements of the soldier and his rifle, the placing of a memorial wreath by the children, and everything else was powerful.”

Others liked touring the National Mall and sites there.

Cadet Ashley White, an MHS senior, was most impressed at the White House.

“I really liked going and seeing the various photographs of the all the presidents meeting with different people,” she said. “The quotes and descriptions of what they were doing was interesting.” 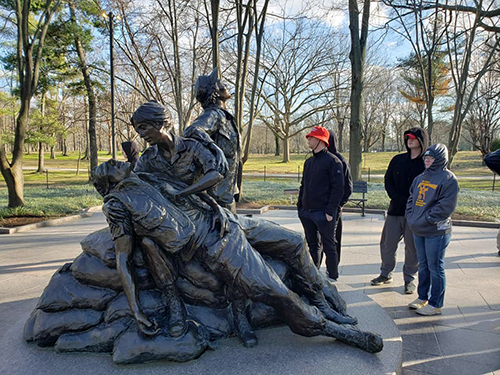 All of the Marion cadets agreed that they learned a great deal about their country from the trip.

This trip was made possible in part by a generous Grant from Round Robins Bingo.