Each year, the Indiana Chapter of the U.S. Army’s 82nd Airborne Division Association selects an outstanding JROTC program from across the state to receive special recognition. Many factors go into the selection process. After careful consideration, the Marion High School Army JROTC was selected for the recognition for the 2019-20 school year.

“This year has been a challenge for everyone with the pandemic,” said Cletus R. Slabach, member of the Indiana Chapter of the 82nd Airborne Division Association selection committee and currently a National Director of the 82nd Airborne Division Association. “However, based upon their previous accomplishments, we have selected Marion High School as the 2019-2020 Outstanding JROTC Program for the State of Indiana.”

The selection committee looks at the professionalism and military bearing of the cadets, the unit’s community service, academic excellence, and the results of the unit’s competitive teams.

“It is with great pleasure that the Indiana Chapter presents this award to the outstanding and well-deserving cadets at Marion High School,” Slabach said. 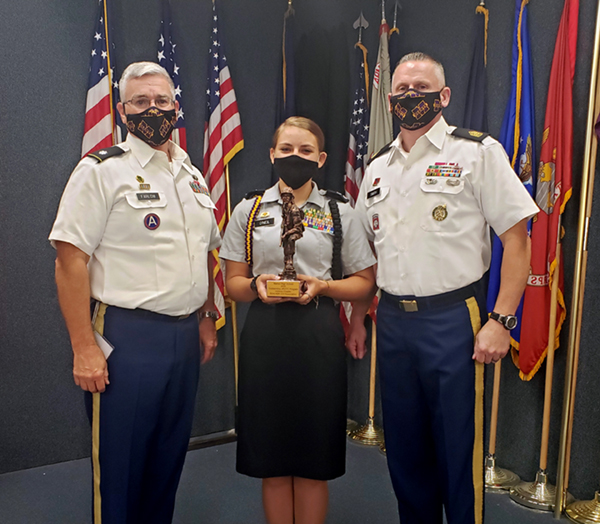 MHS JROTC Cadet Kylee O’Neil, center, receives the Iron Mike statue from the Indiana Chapter of the U.S. Army 82nd Airborne Division Association in recognition of the Marion High School JROTC program being selected as the very best within the state for the 2019-20 academic school year. O’Neil serves as the current Cadet Battalion Commander for the MHS program. Joining her are retired Lt. Col. David Farlow, left, and Command Sgt. Maj. Jon Smith, both instructors for the Giant’s JROTC Department. Smith is a combat veteran of the 82nd Airborne Division.

In recognition of the accomplishment, the 82nd Airborne Division Association presented the JROTC unit’s leadership with the coveted Iron Mike statue.

The Iron Mike Statue depicts a World War II-era Airborne trooper. The statue was not named for any one man or unit, but rather dedicated to all paratroopers, past, present, and future. It has come to symbolize the excellence within the U.S. Army’s Airborne Paratroopers and the Airborne community.

“It is an honor to receive this recognition on behalf of our current and former cadets,” said senior Kylee O’Neil, cadet Lieutenant Colonel and Battalion Commander for the MHS JROTC unit. “We have all put forth a lot of hard work and effort throughout the years. It is nice to see that outsiders have noticed our accomplishments.”

Iron Mike will proudly be displayed among the ever-growing number of other accolades awarded to the Cadets of Marion High School.