Yancey earned her spot by competing in a regional qualification match while shooting as a member of “The X Count”, a club marksmanship team based in Fort Wayne. Yancey, who shoots in the precision category, was a member of a four-person team that qualified to advance to the national championship. 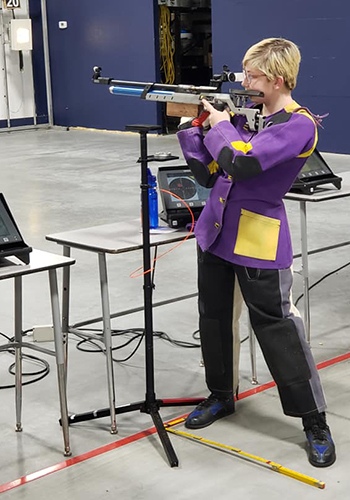 Marion High School JROTC Cadet Alysa Yancey takes careful aim while shooting in a regional competition in Fort Wayne, while seeking to earn a trip to the 2021 Junior Air Rifle Marksmanship National Championship. With a personal high score, she helped her team to qualify to compete in the championship to be held in Griffin, Ga., Jan. 21-23.

Only the top 15 teams from across the nation are invited to compete at the National Championship. Nearly 400 marksmen shot in the precision category.

“What an amazing accomplishment,” said retired Lt. Col. David Farlow, who coaches Yancey as a member of the Marion High School JROTC marksmanship team. “She is clearly the best shooter we have had so far in the 10 years I have been coaching the rifle team. If she continues to progress as she has, we will likely see her shooting in very prominent venues in the future.”

Yancey and other participants shoot what is known as the International Air course of fire. It is 60 shots made from the standing position. This is the same course of fire you would see in the Olympics and World Cup.

The marksman shoots at a target the size of a quarter coin that is 33 feet away. Scores increase the closer the shot is to the center of the target, with a 10.9 being the best score possible. Yancey shot a score total of 596.4.

“I was so excited when I heard I had qualified to go to the championship,” Yancey said. “Really excited!”

Yancey is in her second year of shooting precision air rifle with the Marion High School JROTC team.