Marion High School JROTC Cadet Alysa Yancey has qualified to compete in the USA Shooting National Junior Olympics — the first MHS cadet to do so. Yancey, a member of the school’s air rifle marksmanship team, will shoot in the International Air category.

When Yancey received the formal invitation to attend the competition to be held in Hillsdale, Mich., this May 12-16, it read: “In just a few short weeks, you will stand shoulder-to-shoulder with top quality shooters from across the United States.” 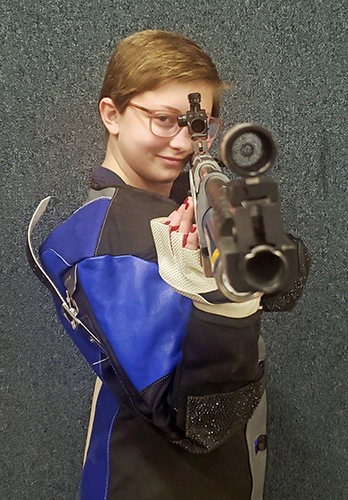 “The Junior Olympics is a step into the big leagues of competitive shooting,” he said. “It is from where athletes are recruited for NCAA collegiate marksmanship teams, and of course ultimately for the Olympics.”

Yancey is one of 83 female athletes across the country selected to compete in her category at the Junior Olympics.

“I was actually at practice when I received the email notification stating I had qualified,” Yancey said. “I thought, ‘Oh, cool, I made it. Now I don’t have to worry any more if I will make it.’”

This is the fourth and most prestigious national-level competition for which Yancey has qualified for this year.

“She just continues to improve every week,” Farlow said. “She has amazing focus and a diligent work ethic. And that is what makes her so good.”

Attending the Junior Olympics is pricey. The Marion JROTC program is accepting donations to help offset the cost for Yancey’s attendance. Donations can be mailed to the JROTC Department at Marion High School, 750W 26th St. Marion, IN 46953.