The Marion High School JROTC Raider Team traveled to Molena, Ga., last weekend to face off against the best teams from across the country at the All-Army JROTC Raider National Championship. There they sought to reclaim the title as the National Champions in the small school category. At the end of a grueling day of competition, the Giants were once again the top finishing small school! 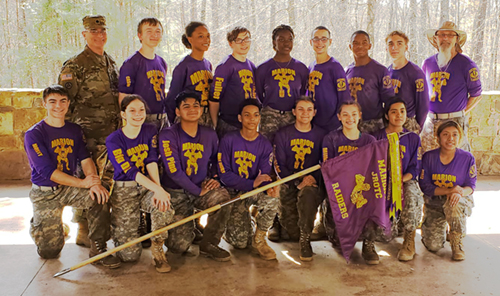 The small school category includes all schools with JROTC programs with less than 150 cadets. It is designed to offer recognition for the smaller schools, because at Nationals they compete against much larger private military academies with larger JROTC programs that can have 500, 1,000, or even more cadets.

This is the second time the Giants have earned the National Championship in the past three years.

The Giants finished in an impressive 8th place overall in the championship, edged out only by teams from private military academies and much larger JROTC programs.

“The team impressed me with all we had to overcome to get here,” said Marion High School senior Kylee O’Neil, the Raider Team captain. “We had an incredible performance, and I am so proud of our team.”

“This was a great win for our team,” said retired Lt. Col. David Farlow, the Giants’ Senior Army Instructor and Raider Team coach. “The team overcame training in the freezing weather, snow, and ice while practicing through the winter after the competition was delayed due to COVID. And they came down to settle a bitter grudge for the defeat last year by fractions of a second.”

During the National Championship last year, the Giants squared off against their primary competitor from Indiana, the Brickies from Hobart High School. With the scores tied following the five competitive events, the Giants were edged out because the Brickies had earned one more top-five finish than the Giants. Consequently, the Giants became the Runner-up National Champions in the small school category. A mere 7/10th of a second in the Physical Team Test event prevented the Giants from earning an additional point that would have enabled them to defeat the Brickies.

“I went there thinking we were going to face a real challenge this year,” said MHS senior Jessica Pickell, who has attended the Nationals all four years of high school. "But everyone gave their all on every event. We just pulled together and pushed through. It was awesome."

The Giants also earned recognition for Nakiya Bibbs who was a top 10 finisher in the Female Ultimate Raider Competition. Bibbs joins Stephanie Charlton as the only Raider from Marion, male or female, to finish in the Top 10 in this individual competition against the very best Raiders from across the country. Steven Fuller finished in 15th place for the Giants in the male category, the highest placement ever for a Marion male. 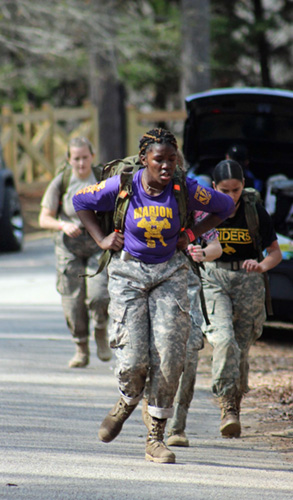 At the Raider Nationals each team faced five events designed to test their teamwork, strength and stamina:

“I also want to express our profound gratitude to the individuals and organizations who made contributions to sponsor a cadet’s attendance to this competition,” Lt. Col. Farlow said. “We simply could not have made this trip, nor provided these fine cadets with the opportunity to excel and achieve without such donations.” 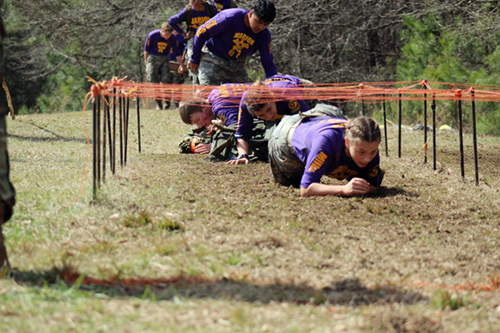 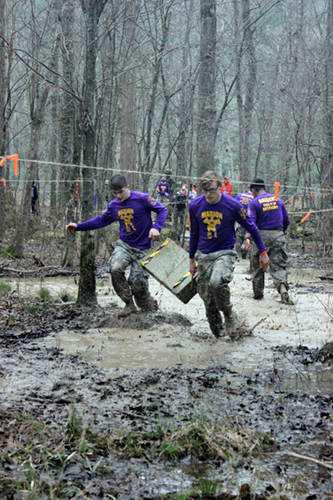 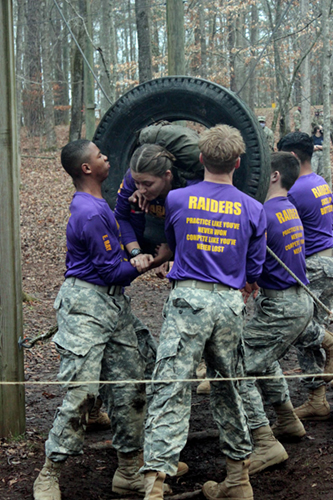 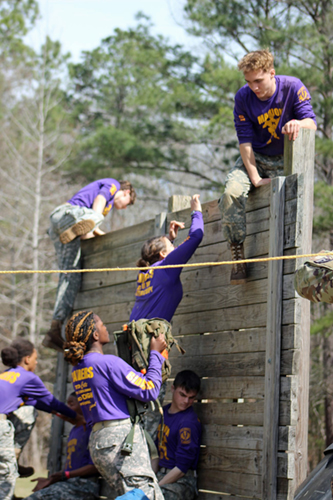 Marion High School JROTC cadet Nic Elliott waits on top of the 8-foot wall to grasp the 35-pound backpack lifted by Nakiya Bibbs while their teammates scale the obstacle.