Two Marion High School JROTC cadets recently competed in the highest level competition hosted in the county for junior shooters (age 20 and below): the Junior Olympics. Alysa Yancey and Hayden Montgomery represented the Giants at the competition hosted by USA Shooting, the sanctioning body for the U.S. Olympic Team. The invitation-only event features the very best rifle shooters in the country. And the Marion cadets stepped up to the challenge.

Regional qualification matches were hosted at various locations around the country, providing all shooters the opportunity to qualify to attend the Junior Olympics. But only the very top shooters were invited to attend the prestigious event, held May 11 through 15 at Hillsdale College in Michigan.

Yancey was a double qualifier, invited to shoot in two disciplines: small bore (.22 caliber) and air rifle. This was her second year to compete in the Junior Olympics in the air rifle category.

For Montgomery, shooting in the air rifle category, it was the first time at this high-pressure event. 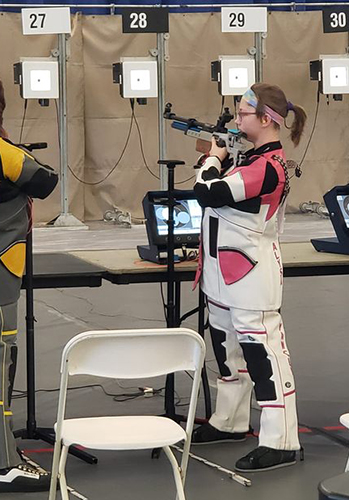 “What an amazing performance by both of our shooters,” said retired Lt. Col. David Farlow, the marksmanship team coach and Senior Army Instructor for MHS JROTC. “For Alysa, she shot well both days. Montgomery was very nervous his first day, but came back very strong shooting his personal best on the second relay. “

The match is held over several days, with each marksman shooting in two relays in as many days. Each relay consists of 60 record shots for score. In the air rifle category, all the shots are taken from the standing position. In small bore, 20 shots are taken from each of the three positions: prone, kneeling and standing.

Watching the performance of all the marksmen competing were NCAA collegiate team coaches and several former Olympic medalists. It was a veritable Who’s Who of the competitive rifle shooting world. 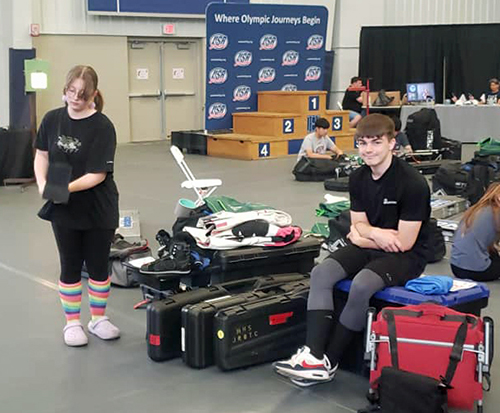 Dealing with the pressure of this match is always a challenge for the athletes.

“My heart was pounding so hard in my chest during the first match,” said Montgomery, a junior at MHS. “It was difficult to get settled into my shooting. But the second day things settled down for me.” 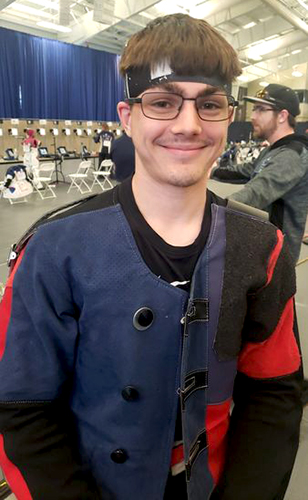 Marion High School JROTC Cadet Hayden Montgomery gives a huge smile following his second round of shooting during the USA Shooting Junior Olympics this month at Hillsdale College in Michigan.

Reflecting on her performance, Yancey, who is also a junior at MHS, said she was happy to have shot near her average.

Farlow noted that the community’s support was essential in getting the cadets to this level.

“We are so grateful for the support these athletes received from the Marion community,” he said. “The donations received have helped us to provide the equipment and training opportunities to produce athletes of this caliber. We simply would not have been able to do so without the generosity of this community.” 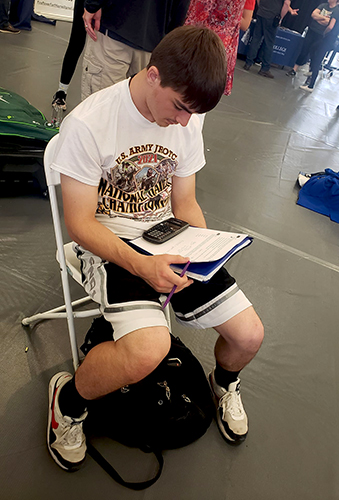 Marion High School JROTC Cadet Hayden Montgomery takes advantage of down time from shooting to keep up with his school work during the USA Shooting Junior Olympics earlier this month.