The Marion High School JROTC Raider Team traveled last Saturday, Oct. 10, to Hobart to compete in a regional competition hosted by last year’s All-Army Raider National Champions. The Hobart Brickies have been the Giants’ principal competitor for several years at both state and national championships.

With the Giants still feeling the sting from being edged out of both the Indiana and national Championship titles by 1 second in both cases last year, the Giants were looking for vengeance, and they brought it, toppling the Brickies and coming home victorious. 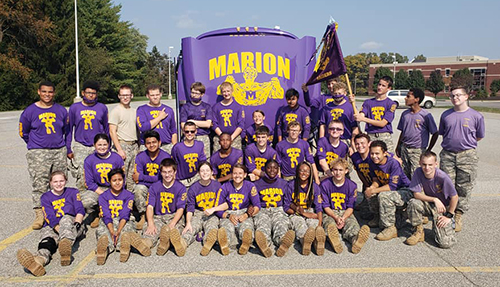 Marion High School JROTC cadets celebrate their victory over last year’s All-Army Raider National Champions on their home turf on Oct. 10. The Hobart Brickies defeated the Giants last year at both the Indiana and National Raider Championships by just one second in both instances. The Giants exacted revenge Saturday, winning there for only the second time in 10 years.

In a modified Raider competition featuring 13 teams from across Indiana, the Giants had to face the Brickies on their home turf.

“This was a significant win for us,” said retired Lt. Col. David Farlow, the Raider team coach and senior Army instructor for the Giants. “Unlike football with its 100-yard field, or volleyball with a 60-foot by 30-foot court, Raider competitions are all varied and unique to the home course. Each host can have obstacles, event distances, etc., that are totally unique. So for us to go and beat Hobart on their home course is huge! In the 10 years we have been doing Raiders this is only the second time we have beaten them at home.”

Due to COVID, the Raider competition at Hobart was modified from a series of eight specific events, each individually timed, to a four-event competition with a continually running clock. From command start, each team completed each event as quickly as they could and then ran to the next event to continue their effort. The clock never stopped.

Cadets started off with the physical team test where the teams faced a series of obstacles designed to test their strength, teamwork and endurance. They scaled a 10-foot wall, carried a canoe with 250 pounds of ballast, and jumped through a suspended tire, among other challenges.

Marion High School JROTC Cadet Jessica Pickell is assisted over the 10-foot wall by teammate Evan Ray during the physical team test, as other teammates work on getting over the wall too. 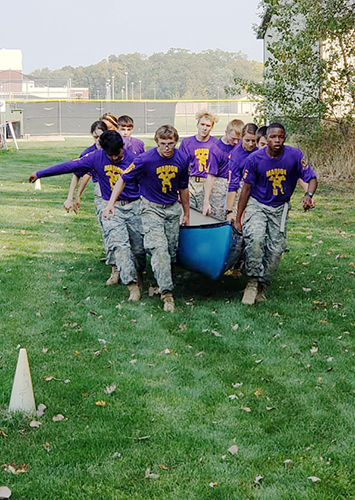 MHS Raiders run with a canoe with 250 pounds of ballast during the physical team test.

Immediately upon completion, cadets ran to the litter carry event, where they grabbed eight backpacks weighing up to 40 pounds and a stretcher with 120 pounds to simulate an injured person. They ran with the load for nearly 1 mile. 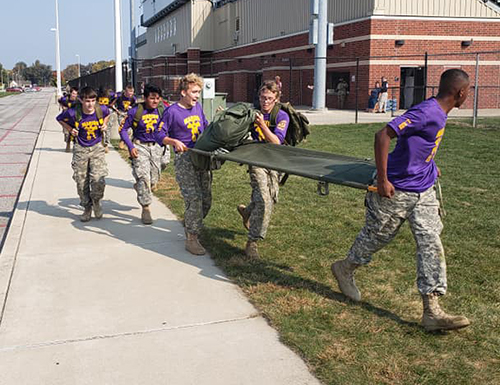 MHS Raiders sprint toward the finish line while carrying a stretcher with 120 pounds of weight during the litter carry event.

After completing the litter run, the cadets ran a quarter of a mile to the terrible tires event, where they faced a pile of more than 40 tires varying in size, including tractor, truck, and car tires, that they had to move the tires about 50 yards.

Cadets then proceeded to their final event, the one-rope bridge, in which they rapidly constructed their crossing equipment and scaled the span of 50 feet over a simulated river. Once across, the equipment was recovered and the timer stopped, ending the competition.

“It was a big relief for us to win at Hobart,” said cadet Kylee O’Neil, an MHS senior and the Giants’ team commander. “I had been stressing about how we would do there for a few weeks. I was worried about our teamwork going in due to the loss of a few key Raiders from the team.”

But O’Neil’s concerns were for naught as the Giants defeated the Brickies by 28 seconds and stomped all other comers by over 6 minutes.

The coach for the Brickies, retired Lt. Col. Scott Buhmann, commented after the match that the Giants must return again this year to the National Championship.

“[The Giants] are hard as woodpecker lips,” he said. “They are truly national contenders again this year.”

The Giants will be back at it again on Oct. 31 when they host the “COVID Raider Challenge” on their home turf. They will face an anticipated 18 other teams from across the Midwest. The Brickies will be there seeking to return the favor to the Giants.