A player and coach from Marion High School’s e-sports team were part of the 2020 NBA 2K League Draft on Saturday, with Jack White, an MHS senior, making the call to New York to announce Indiana Pacers Gaming’s first round draft pick.

White traveled to Indianapolis for the exciting event as did MHS e-sports head coach Travis Hueston. They were joined by two fellow gamers from Kankakee Valley and East Noble High Schools. From the draft room with current Pacers Gaming players, Indiana National Guard members, and the Indiana High School E-Sports Network, White made the call to NYC to announce Pacers Gaming’s choice of gamer Eddy “BOHIO” Perez with the fourth overall draft pick.

“It was really a great experience,” White said. “It was awesome to be making the phone call that would change someone’s life forever.” 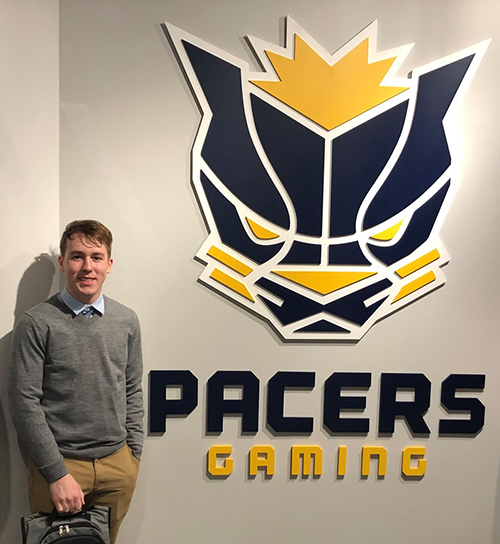 Jack White, a senior at Marion High School and a member of the Giants e-sports team, stops for a photo inside the Pacers Gaming headquarters in Indianapolis on Saturday, Feb. 22, 2020, where he helped announce Pacers Gaming’s first round draft pick in the NBA 2K League 2020 Draft.

There were 229 players who qualified for the 2020 draft through a variety of opportunities run by the league. Of those, 68 players were chosen by the 23 gaming teams in a four-round draft held at Terminal 5 in New York on Saturday. Those 68 join 70 players who competed in the 2019 season and were retained by their teams for the 2020 season, for a total of 138 players who will compete in the 2020 season of the NBA 2K League.

“This was a giant opportunity presented to us by Pacers Gaming, the Indiana National Guard, and the Indiana High School E-Sports Network,” Hueston said of the chance to participate in the draft. “Trips like these are important to successful programs, and we look forward to continuing to grow.”

More information about Pacers Gaming can be found at their website.

Hueston is the instructor for Marion Regional Career Center's Cybersecurity and IT Academy.

The Giants e-sports program launched its Season 1 competitions on Feb. 17 and are off to a great start, winning their first two matchups. The team plays in a variety of gaming leagues from their “home court” at the Afena Credit Union Giants E-Sports Arena at Marion High School.

E-sports, short for electronic sports, is organized video game competition between teams. It’s also a billion-dollar industry. According to Business Insider, total viewership is expected to nearly double over a six year period, from 335 million in 2017 to an expected 646 million by 2023. According to a research overview by Gaming Scan, in the US e-sports is expected to have more viewers than every professional sports league but the NFL by 2021.

As a result, investment into the field has skyrocketed, along with revenue. Prize money, too, is rising, with one individual gaming event in 2019, the Fortnite World Cup, eclipsing prize money for some of the world’s biggest traditional sporting events, including Wimbledon, the Indy 500, and The Masters.

According to ESPN, more than 125 colleges offer varsity e-sports, awarding more than $15 million in scholarships annually. The sports broadcaster held its first Collegiate Esports Championship in May 2019.

But while the big dollar amounts and massive viewership garner attention, participation can help students thrive academically and socially, developing skills such as teamwork, cooperation, and sportsmanship just like traditional athletes. E-sports also helps students learn to analyze statistics and develop strategies, all of which can help boost brain function, according to a study published in Nature Research that showed expert action video game players had marked improvement in their cognitive functions, motor control, and overall perception.