Criteria for Nominations
Any Marion High School graduate, who has made substantial contributions to the achievements of Marion Community Schools, and/or reflect positively thereon, is eligible for nomination. All nominees must have conducted themselves in such a manner to reflect honor upon Marion Community Schools and have qualities of character and standards of conduct that are exemplary.

Additional clarification for nomination criteria is as follows:

Nomination Process
We welcome community members’ nominations. Nominations must be in writing, and received in the office of the Superintendent. Nomination forms can be found online (click here) as well as at all Marion schools. The nomination period will reopen next year. A committee of 12 members will serve as the selection group. Nominees stay on a list for consideration for a three-year period. 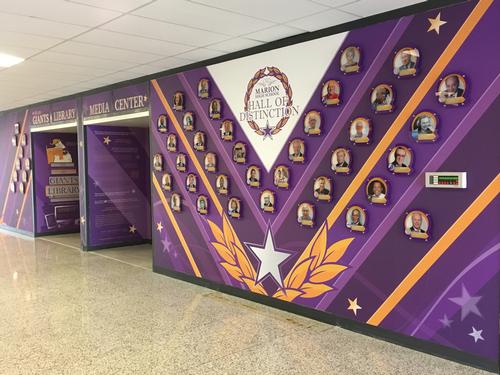 A look at the Marion High School Hall of Distinction display inside MHS.