The Marion High School JROTC Drill Team recently traveled to Sheppardsville, Ky., to compete against 16 other schools in a regional competition recognized as one of the toughest. In previous years, the Giants were pleased to come away with just one placement. But this year they showed up ready to compete, and they came home with more trophies for top placements than ever before.

“I am very pleased with how we performed,” said retired Command Sgt. Maj. Jon Smith, Army JROTC instructor at MHS. “We brought home more hardware than in all our previous times competing here combined!”

Headlining for the Giants was Cadet Joanna Hidalgo and her all-female color guard that pulled down the second place finish in what was considered her team’s strongest performance to date. They also earned the highest placement for the Giants ever at this competition.

“We really worked well together,” said Hidalgo, an MHS senior. “All the practice and competitions are helping us to continue to improve. I am really proud of our girls.” 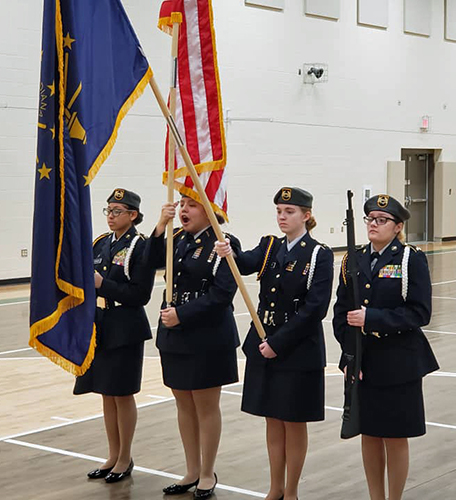 Adding to the Giants’ trophy count was the performance of the armed squad conducting the regulation drill routine that was led by Cadet Tyron Rice. Commenting on his squad’s performance, Rice thought they had improved much over their performance from the prior week, despite his much greater sense of nervousness.

“Whew, I was shaking,” said Rice, an MHS senior. “But I had to pull it all together for the team.”

And bringing home the third trophy were the newcomers, the first-year cadets competing as a squad and led by MHS freshman Evan Ray. They too pulled in a third-place win for the Giants. 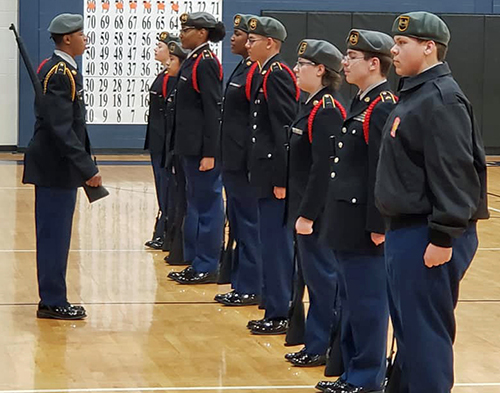 The final accolade for the Giants was earned by Cadet I’Yela Hornaday during the individual knockout competition. Hornaday, an MHS senior, competed against nearly 200 other cadets under the watchful eyes of a dozen graders. The cadets were put through the paces of individual drill commands. The slightest infraction would result in a cadet being removed from the floor, or “knocked out”. Hornaday’s steady performance earned her the sixth place finish from all who competed. 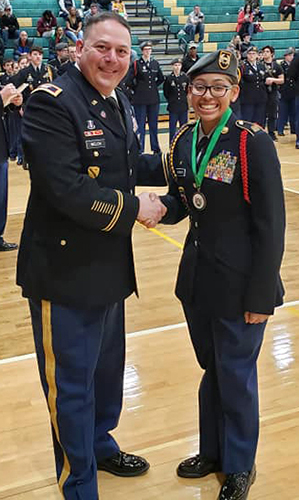 “I am very proud of how the cadets competed,” Smith said. “But we made some very obvious mistakes that prevented us from placing even higher. The nerves were working on the cadets. But it was a great meet for us to gain confidence and identify those areas where we need more work.”

The Giants will be competing next at Warsaw High School against a dozen other schools from Indiana and Michigan.