The Marion High School JROTC Raider Team traveled to Hobart High School last Saturday to compete in their fifth regional competition in as many weeks. There, they faced numerous teams from Indiana and Michigan. But competing at Hobart is not the same as competing at other regional competitions. It is truly a grudge match among the titans. And this year the Giants were more than prepared. 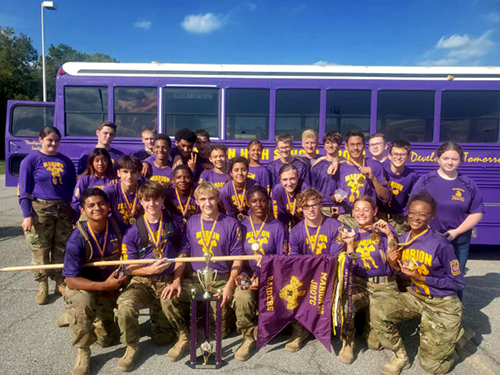 The Marion High School JROTC Raider Team earned victory at Hobart High School on Oct. 9. The win was especially sweet for the Giants as it was the third time they have beaten the Hobart Brickies on their home turf.

“We stomped them, all of them, even Hobart at home!” exclaimed veteran Raider Stephany Miksch, a junior on the Marion squad. “We destroyed them. We blew [Hobart] out of the water. I felt so accomplished.”

The Giants nearly swept the five-event competition, easily taking first place in four of the events while losing by just a few seconds to the home team on the 1-rope bridge event.

This was the 10th year in a row that Marion has traveled to compete at Hobart. And it was painful for the Giants in the early years. But the challenge gave birth to an intense rivalry between these schools.

“Hobart was, is, and always will be a fierce competitor for us,” said retired Lt. Col. David Farlow, the Raider Team Coach and Senior Army Instructor for the Marion High School JROTC. “For our first few years of doing Raiders, they would literally destroy us. We were nowhere near their level of proficiency. But with a lot of hard work we have become their equal in the past six years, and a few times have surpassed them.”

With Saturday’s victory the Giants have now defeated Hobart on their home turf three times, while never yet losing to them at home here in Marion.

“It felt really good to win for the three-peat,” said Evan Ray, a junior. “And next year we will go for four.” 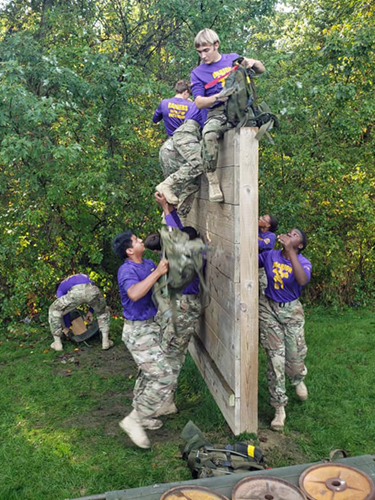 The Marion High School JROTC Raider Team demonstrates synchronized teamwork while maneuvering over a 9-foot wall with both personnel and heavy backpacks as part of a competition held at Hobart High School. The Giants easily defeated all other teams, including the home school for the third time in the teams’ intense rivalry.

But the relationship between the two squads is not all about competition.

“You need to understand that Hobart has provided a great deal of assistance in the growth and development of our team,” Farlow said. “Lt. Col. Scott Buhmann, my counterpart at Hobart, helped coach me and our team on ways to improve. We both recognize that competition helps us to improve both our teams. And we are both committed to helping each other, and any other team for that matter. That is just how we roll in JROTC.”

“In multiple occasions where our teams have met, the difference between victory and defeat has been mere seconds,” Farlow said. “These teams are peer equals. And that drives us both to become better.”

A trip to the National Championship is expensive, with food, lodging, registration and transportation costs. The Giants are accepting donations to help with the costs for this venture. Donations can be mailed to Marion High School JROTC, 750 W. 26th St. Marion, IN 46953. 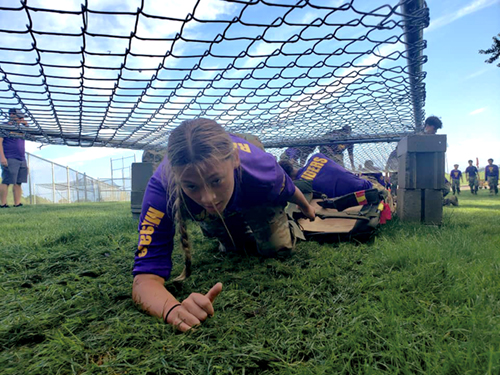 Marion High School junior Stephany Miksch struggles through the low crawl while dragging her 35-pound backpack at the regional Raider competition hosted by Hobart High School. Miksch and her JROTC teammates easily won the competition, defeating numerous other teams from Indiana and Michigan. 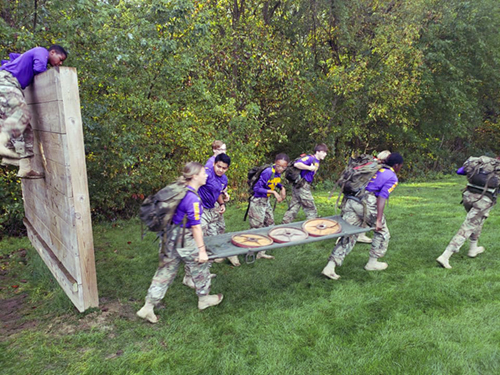 Running against the clock and against other teams from Michigan and Indiana, the Marion High School JROTC Raiders endure heavy backpacks, a weighted litter, and many obstacles as they negotiate the litter carry event at a regional Raider competition at Hobart High School.