A team of female cadets from the MHS JROTC muscled their way to a first-place finish recently, earning victory over more than a dozen other teams from around the Midwest at a Raider Team competition in Kentucky. 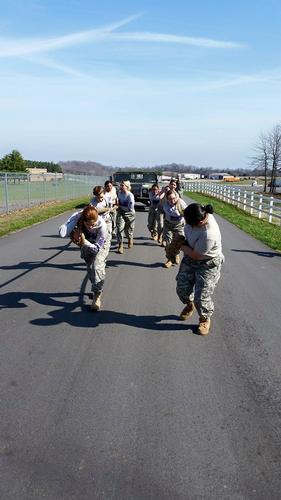 >> Click here to view more photos from the day!


Two dozen MHS JROTC cadets traveled to Scottsville, Ky., earlier this month to participate in a regional Raider Team competition against 20 teams from across the Midwest. The Marion Giants fielded two teams at the competition, including for the first time an all-female team.

Raider competitions are designed to test the physical strength and endurance, as well as the ability of cadets to work as a team. Cadets completed various challenging tasks during the daylong event on March 21: They carried a 150-pound stretcher on a 1-mile trek through the woods, where they encountered climbing obstacles; they pulled a Humvee 100 meters uphill; they crossed a ravine by constructing a one-rope bridge; they flipped tractor tires and carried 50-pound weighted jugs non-stop for 10 minutes; along with several other challenges.

At the end of the day, each team was completely exhausted.

“It was an amazing day,” cadet Jesenia Trujillo, captain of the all-female MHS Raider Team, said. “Our girls fought through each event, encouraging each other to push on. We knew we could do it.”

“Not only was this the first time we fielded an all-female Raider Team, but they also ended up beating every other all-female team there,” he said. “All our Raiders have been training hard. It was great to see the ladies take home the first place trophy.”

Members of the winning team were:
The Raider Team has two more competitions remaining this season, including a competition hosted by Marion High School on Saturday, April 25.