Marion High School JROTC Cadet Levi Hofmann shot his best score ever to earn fifth place in our region for the Army JROTC National Marksmanship Championship. His score placed him 26th in the nation when scores across all regional competitions were tallied. 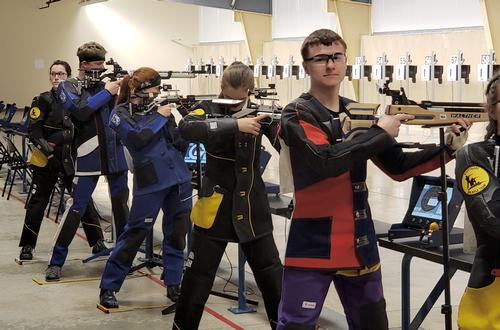 
Hofmann, a junior at MHS, competed in the regional match at Camp Perry, Ohio, facing off against the top 90 cadets in the precision air rifle category around the country. His finish was the highest placement ever for a Marion High School marksman in an Army JROTC National Championship.

Over the course of two days, each marksman shot daily in the three positions of standing, kneeling and prone (lying flat on the ground). Their scores were then tallied for placements. Hofmann earned a score of 1,143 out of a possible 1,200. Because of his strong scores, he advanced into the final “pressure cooker” shoot-off along with the top seven other marksmen in the region.

“I was so nervous; I knew I was close to making it into the pressure cooker,” he said. “The concentration was so intense.”

During the pressure cooker, all competitors take one shot at a time in the standing position, trying to move up in the placement order. Hofmann was able to move up one position in the ranking to finish fifth.

Hofmann and teammate Hailey Teeguarden, a senior at MHS, were the only JROTC cadets from the state of Indiana to qualify to compete in the regional matches for the Army JROTC National Championship.

“What is really amazing is that this is the first year we have fielded a precision rifle team,” said Senior Army Instructor Lt.  Col. Farlow.  “In previous years we have only competed in the entry-level sporter category. So to have two athletes qualify for the Nationals is quite an accomplishment and speaks well of their abilities.”

The precision category is the same level in which collegiate athletes and Olympians compete. It is the top tier within the air rifle competitive categories.