Marion High School juniors and seniors will have the opportunity to learn a sobering lesson Wednesday afternoon, as Code Prom brings the dangers of drinking and driving to life.

Emergency officials, including police, EMT, firefighters, and the Samaritan medical helicopter, will be responding to the MHS campus sometime after 1:30 p.m. Wednesday with lights and sirens blaring, but it will be in the name of education.

Juniors and seniors will gather to witness the mock emergency, which will vividly illustrate a scene that is all too common: people injured or even killed in an accident involving a drunk driver. 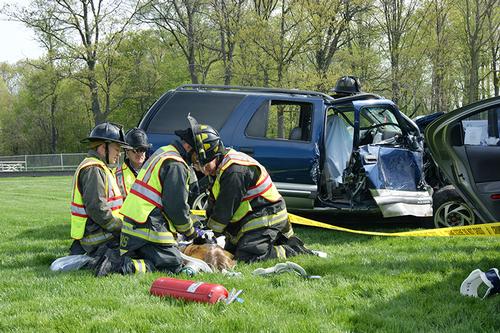 
If rain delays the event Wednesday, it will be held on Thursday instead.

The MHS prom is coming up this weekend, and the school, along with Marion Fire Department, is putting on Code Prom in an effort to make students think twice before adding alcohol into the mix.

Students will gather in Walton Performing Arts Center before the mock emergency scene to watch videos that set the stage. After the mock emergency, they will return to the Walton Center for a mock funeral, a follow up on the drunken driver, and a presentation on the teens who have been killed in accidents in Grant County since 2000.

Any student found to be in possession of, using, transporting, or selling alcohol or other illicit drugs at any school-related function, including prom, will be subject to suspension or expulsion from school, in accordance with Marion Community Schools policy. Cases may also be referred to Marion Police Department, and charges may be filed. The same penalties may be applied if a student is found to be under the influence of such substances, even if the consumption took place prior to the school-related function.

Athletes found to be in violation of this policy can also be subject to suspension or permanent banning from participation in Marion High School athletics.

We encourage everyone to use good judgment and stay safe during this special weekend.