From the Indiana Department of Health:

Hoosiers aged 5-11 are eligible for a booster dose of COVID-19 vaccine following authorization this week from the U.S. FDA and Centers for Disease Control and Prevention.

The Indiana Department of Health is advising vaccine providers that they can begin administering boosters of the Pfizer pediatric vaccine to children in this age group whose last dose was administered at least five months ago. The Pfizer vaccine is the only one currently authorized for children ages 5-11.

The Marion High School music department has earned the Indiana State School Music Association’s highest honor, the Total Department All Music Award, one of only 13 schools in the state to earn the award this year.

Marion Community Schools is one of only two school corporations in the state to earn the Total Department All Music Award in both high school AND the junior high / middle school / elementary category! (McCulloch Junior High has earned the award seven times in a row!)

The McCulloch Tech Giants Pink Team put Marion in the spotlight at the VEX IQ World Championship earlier this month in Dallas. 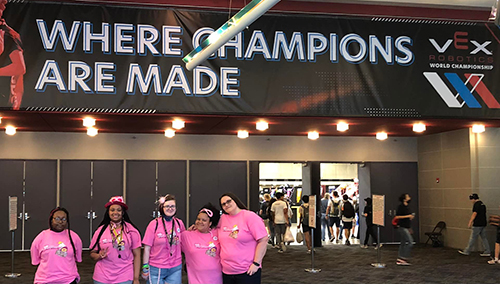 Reminder May 25th will be the last regular student day of the 2021-22 school year at Marion Community Schools!

We are looking forward to an exciting summer and want to remind you that student iPad collection will begin this week.

Students who were provided take-home iPads will be expected to turn their device and all accessories.

Marion Community Schools is pleased to announce the 2022 inductees to the Marion High School Hall of Distinction.

Two Marion High School JROTC cadets recently competed in the highest level competition hosted in the county for junior shooters (age 20 and below): the Junior Olympics. Alysa Yancey and Hayden Montgomery represented the Giants at the competition hosted by USA Shooting, the sanctioning body for the U.S. Olympic Team. The invitation-only event features the very best rifle shooters in the country. And the Marion cadets stepped up to the challenge.

In round one, the undefeated Giants took on Kankakee Valley High School, earning victory with a final score of 10 to 5. Marion then battled it out with Mooresville High School during the championship round, ending with a nail-biting final score of 8 to 7.

Marion Regional Career Center is proud to announce that one of its students was honored recently by the state for his outstanding work!

MRCC information technology student Jaden Hawkins is a recipient of the Award for Excellence for Secondary CTE Students. He was recognized at the annual Governor’s Workforce Cabinet Awards for Excellence Program, held this year on May 10 in Indianapolis.

On Saturday, May 14, the undefeated Marion Giants varsity Super Smash Brothers e-sports team will travel to South Bend to Bendix Arena, the largest commercial e-sports arena in the Midwest, to compete in the high school e-sports state championship.

Though attendance at the event is limited to players and coaches, there is a virtual way to cheer on the Marion Giants!

Article provided by Marion Community School of the Arts

Marion Community School of the Arts is offering a wide variety of summer programming for all ages in July, and enrollment is open. Camps are filling up fast, with opportunities to explore theatre, film, dance, and visual arts. CSA's teaching artists will bring introductory and intermediate level experiences, and lots of fun to 305 S. Adams St. in downtown Marion.