The Marion High School JROTC program now has a team bus to travel to state, regional, and national competitions, thanks to the generous donations of community members and others.

The bus, proudly painted in Marion purple is a new source of pride for the cadets and their impressive Army JROTC program at the high school and reflects the Giant cooperation between the school corporation, the MHS JROTC Department, and many individuals and community organizations. 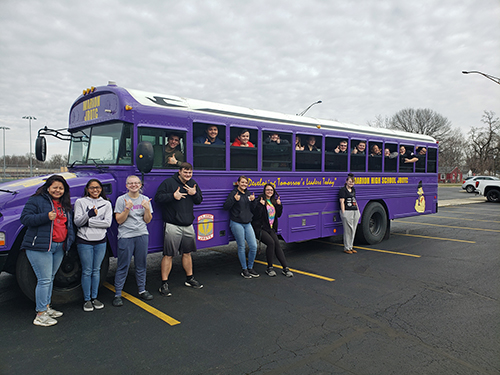 Marion cadets travel extensively around the Midwest and further as they go to competitions, events, camps, and other training opportunities within Indiana, but also in surrounding states. They have also traveled to several national championship competitions in Georgia, and last year they traveled to Gettysburg, Penn., and Washington, D.C., on an educational excursion.

The challenge was that Indiana state law limits how far a traditional yellow school buses can travel out of the state. And smaller activity buses, while not limited in travel distance, can only provide minimal seating and cargo space. A solution was needed so that the growing number of cadets who were qualifying to attend out of state competitions could be transported safely and effectively. The solution was a larger activity bus.

“Last fall I approached the Marion Community Schools Transportation Department with the suggestion of allowing JROTC to convert one of the older traditional school buses into an activity bus,” said retired Lt. Col. David Farlow, the MHS JROTC Senior Army Instructor. “We agreed that JROTC would raise the funding for the conversion if a bus could be provided.”

“After considering the ever increasing travel requirements for our immensely successful JROTC program, and our ability to support the requirements, we determined it made perfect sense to take a regular school bus currently being used as a spare and convert it to this purpose, “said Dr. Bob Schultz, Assistant Superintendent of Business Affairs for Marion Community Schools. “We receive very little in trade-in value on the buses as they end their term of service. So for a minimal expenditure we could continue to provide our superb cadets with a vehicle to meet their transportation needs.”

Once a bus was approved the task shifted to raising the funds to make the conversion.

“We reached out to former cadets, local community organizations, and family and friends of cadets to help us raise the $7,500 needed to complete the conversion,” Farlow said. “We even ran a GoFundMe page.”

The response was overwhelming. The American Legion District #5 gave a huge donation, as did the JROTC HOOAH Parent Support Group. But many other individuals made smaller contributions that added up and helped the cadets meet their goal.

Farlow contacted a Brad Velasquez from BBD Kustom’s Auto Body and Paint in nearby Poneto to see if he was interested in doing the do the work, explaining the limited funding available.

“Brad and his guys committed to staying within our budget,” Farlow said. “And, WOW! When I saw the finished product I was blown away. They really exceeded our expectations.”

There was a similar response from the cadets when they saw their new team bus.

“It is awesome that the school corporation was willing to support us,” senior Josiah Hamilton said. “It will definitely make our traveling to all of the out of state competitions and to the National Championships more comfortable.”

Now all that remains is for the cadets to come up with a name for their new ride.

The cadets will travel in style for the first time this Saturday as the MHS Rifle Marksmanship Team competes in the Indiana State Civilian Marksmanship Program’s State Air-Rifle Championship in Greenfield.