Yancey achieved the highest score in each of the three shooting positions, standing, kneeling, and prone.

“I feel like I just keep repeating myself,” said her coach, retired Lt. Col. David Farlow, Senior Army Instructor for the MHS JROTC. “She just continues to get better with each major competition. And our team collectively did a fine job too.” 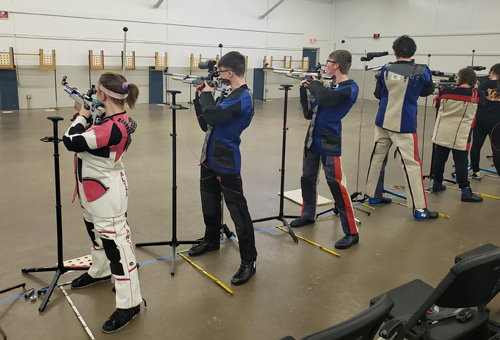 But Yancey is always reaching for more.

“I was happy to win,” she said after the match. “but I realized there were still things that I need to work on.”

And she will have several more opportunities to do so, the most prominent of which being her upcoming appearance at the Junior Olympics in May.

The usually quiet and composed Yancey graciously accepted all the medals and awards for being the match’s top shooter. She will also receive a $1,000 scholarship from the American Legion.

The Giants will travel this weekend to Fort Knox to compete in the JROTC Cadet Command 7th Brigades’ Championship. There they will face the best Army JROTC marksmanship teams from Indiana, Michigan, Ohio, Kentucky and Tennessee. The Giants are the defending champions in the Precision category, which is the same level in which collegiate athletes and Olympians compete. It is the top tier within the air rifle competitive categories.