Yancey ranks as No. 12 marksman in the nation

Marion High School JROTC Cadet Alysa Yancey faced off against the very best air rifle marksmen this past weekend at the All-Services JROTC Marksmanship Championship. There, the top 85 cadets representing each of the military services’ JROTC programs squared off in a two-day competition. Yancey, the first Marion cadet ever to qualify to compete in the All-Services Championship, finished in 12th place overall.

“I shot my average, so I was happy with how I performed,” said Yancey, a junior at Marion High School. “I am satisfied with how it turned out.” 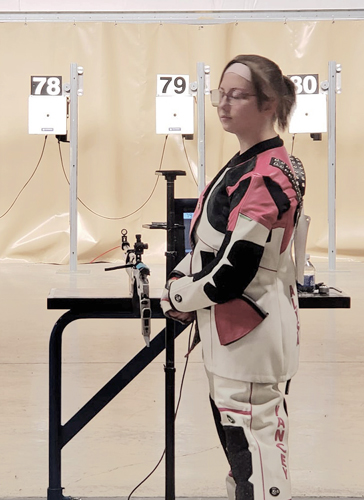 Marion High School JROTC Cadet Alysa Yancey prepares to shoot in the standing position during the All-Services JROTC Marksmanship Championship last weekend. Yancey competed against the top 85 marksmen from all the U.S. military services’ JROTC Programs to finish an amazing 12th place overall. She was the first Marion cadet ever to qualify to compete at this level.

Over the course of two days, each marksman had to shoot a 3x20, which is shooting 20 shots from each of the tree firing positions: prone, standing and kneeling. The target, the size of a quarter coin, is 33 feet away. Millimeters in each shot will separate victory from defeat. To hit a perfect shot, scored as a 10, the marksman would have to hit a dot the size of the tip of Washington’s nose on the quarter. Yancey finished with a score of 1169 out of a possible 1200.

Her coach, retired Lt. Col. David Farlow, who is the Senior Army Instructor for the MHS JROTC, said Yancey performed well in this high-pressure event.

“I am very proud of how she performed in this match,” he said. “There were things she did very well in the match and there are things she still needs to work on. But she always takes on the task of seeking how to improve. And that is why she is shooting at this prestigious level.”

Farlow said there are several reasons why the Giants marksmanship team is doing so well.

“We have several cadets who have learned that the key to success is focused and diligent work,” he said. “We also have two fantastic assistant coaches in David Kuester and Kent Santee who volunteer their time to instruct and mentor these kids. But we also have a supportive school system and community that has provided tremendous resources to provide the cadets with the best possible training equipment.”

Farlow elaborated that the new SIUS Electronic Scoring System, which was purchased in part through the generous donations from the Marion High School Alumni Association, the Brandon Barrett Foundation, the American Legion, the NRA Foundation and many individual donors, is paying huge dividends.

“By using the SIUS System, each shooter has immediate feedback on every shot,” he said. “And the analysis tools help both shooter and coaches better understand what is working and what aspect of each shot needs to be improved. Our recent results just this year show the tremendous leap forward the new system is providing each shooter.”